Robin Hood and the Monk 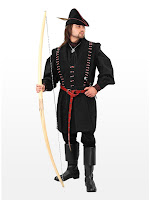 Although most depictions of Robin Hood place him in England when Richard Lionheart was away on Crusade and King John was messing up the country (the 1190s), there are no mentions of him in any literature until significantly later. The earliest is in Piers Plowman in the 1370s, and then only with a reference to the "rhymes of Robin Hood."

About 1420, Andrew Wyntoun's Orygynale Cronykil of Scotland mentions "Lytil John and Robyne Hude" living in the "Yngol Wood" (English woods) in his entry for the year 1283.

What these rhymes/stories were at the time we can only guess. The oldest tale we have, "Robin Hood and the Monk," is from about 1450. In it, a devout Robin wants to go to Mass in Nottingham, and is warned by Much the Miller's son that he should take 12 men with him for safety. He only takes Little John. Along the way they make a wager. Robin loses, refuses to honor the wager, and Little join leaves him alone. While praying at St. Mary's in Nottingham, the sheriff is called on him by a monk that Robin robbed on some earlier date.

Once Robin's men find out, they decide to rescue him. They find the monk, riding with a page. Little John kills the Monk and Much kills the page. The monk had letters for the king, which Little John and Much deliver, explaining that the monk died along the way. The king tells them to bring Robin to him.

Little John and Much deliver this message to the sheriff, explaining the monk's absence by saying the king made him an abbot. They enter the prison, kill the jailer, and free Robin, who pledges loyalty to Little John for being so good after Robin was so dishonest to him. Little John agrees to keep the previous arrangement of leadership. The king, learning of all this, is upset that he was hoodwinked, but decides to drop it.

We do not see any signs here of Robin being particularly good. But the story had adventure and plot turns, so it was fun to tell. It's a long time later when characters like Maid Marian and Friar Tuck get added, as well as the idea that he stole from the rich to give to the poor.
Posted by Daily Medieval at 8:00 AM