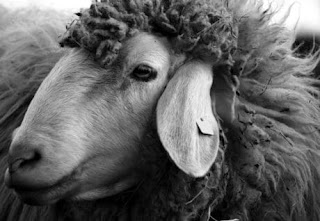 The previous post on the Mesta mentioned the kings of Castile giving shepherds rights-of-way that overrode those of other landowners in order to get their sheep to good pasture. There aren't many shepherds or large flocks around these days, and so you might not realize the important stake the kings had in sheep, especially Merino sheep. Those flocks were owned by royalty.

Sheep provided wool, and Merinos were champions at it. Their wool was an incredibly valuable export because of its spinning count, or S value. The S value describes how fine the strands of wool are. The finer the strands, the more yards of fiber you can spin from it. One pound of merino wool, with an S value of 62, could produce 34,720 yards of yarn. (A "hank" is 560 yards.) Merino wool was much finer than other breeds, and produced not only softer wool, but more of it. Finer strands also enabled it to be more easily interwoven with other fibers.

They were bred in southwestern Spain in the 12th century, and there are careful records of attempts to breed them to be even more useful. The original herds might have been brought by Berbers early on, but English breeds were introduced to help develop the Merino, as described in the entry on "Wool" in The New American Cyclopaedia (1858).

Spain held a monopoly on the finest wool in the world through the 16th century. In fact, export of living Merino sheep was a crime in Spain, punishable by death, through the 17th century! The monopoly started to wane when some were sent to Sweden in 1723, and then in 1765 when King Charles III of Spain (1716-1788) sent some to his cousin in Saxony to start a private flock. Merinos started trickling out to other countries, and Spain soon lost its pre-eminence in the world of fine wool.

But the Merino is still king.
Posted by Daily Medieval at 7:00 AM