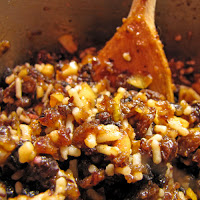 With the holiday season upon us, folk are preparing to consume mincemeat pies at the conclusion of their meal. Growing up, I was told it was a dessert made from ground up fruit and spices and not to think of it as meat, and I was never tempted by it. Imagine my surprise, years later, to discover:
1. "meat" wasn't a euphemism
2. it's not a dessert, but a main dish
3. I loved it

Numbers one and three might not be a surprise or noteworthy, but number two was worth looking into. King Henry V had a mincemeat pie as a main dish for his coronation feast, and Henry VIII apparently preferred it as his Christmas supper. Its creation goes back further, however.

You might say it originated by accident. Crusaders returning home in the 12th century brought with them spices not found in western Europe before. These were tested as preservatives for meat, or ways to add flavor to dried meat. (The notion that spices were used to cover up the small of rotten meat should be dispelled. No one would eat rotten meat, and we had learned ways to preserve the meat of slaughtered animals long before this, through smoking/drying or salting.)

Cinnamon, cloves, and nutmeg were the three chief spices used in the Yule dish, representing the gifts  brought by the Magi. These were added to minced (finely chopped) meat, often beef or beef tongue or lamb, as well as beef suet (the hard white fat from around the kidneys and loins). Early recipes add citrus peel and sugar, or dried and chopped apples.

Early pies were baked in an oblong shape, to represent the manger at the Nativity. Over time, the addition of sugar made them sweeter, and they began to migrate to the dessert course. At that point, they morphed into the traditional round pie shape, and then into tarts that could be easily picked up and eaten by hand.
Posted by Daily Medieval at 7:00 AM