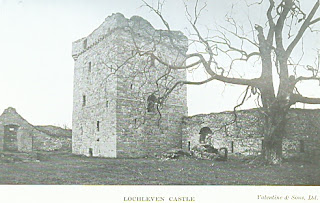 When Robert Burns published his Poems, Chiefly in the Scottish Dialect (1786), no one knew that it would become such a success that the reading public would be eager to lap up anything old and Scottish. But 1790 saw the publication of the Orygynale Cronykil of Scotland, by Andrew Wyntoun.

Wyntoun (c.1350-c.1425) was an Augustinian canon of St. Sers Inch, a religious house  of Loch Leven, as well as a poet. The Chronicle is very pro-Scotland, especially regarding Edward I and his treatment of William Wallace and Scotland.

The Chronicle starts in the distant past (Alexander the Great, ancient Britons) and ends in 1420. It contains a number of "firsts": it is the earliest extant document in the Scottish dialect; it has the first use of the word "Catholic"; also, it contains the first mention in print of Robin Hood that ties him to a particular time (1283) and an area just south of the Scottish border in Carlisle. Tales of an outlaw who hides out in the woods and harasses the English king were of interest to the Scots, especially after William Wallace et alia did the same after Dunbar and Falkirk. It also includes the earliest version of MacBeth and the three witches.
Posted by Daily Medieval at 8:26 AM