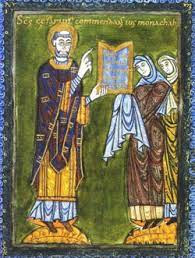 Cæsarius of Arles meant well. He was a major figure in his generation to preach asceticism in daily life, and as a bishop urged the necessity of preaching morality to all, including those who were opposed to Christianity.

Consequently, Cæsarius left over 200 sermons urging morality and goodness. They were copied and spread around the Christian world, expressing love, the last Judgment, and care of the poor. His sermons were quoted by Thomas Aquinas, and lines wound yup in some SAnglo-Saxon poetry.

He urged seriousness; he spoke against celebrating New Year's, which in the Roman Empire had become a time for debauchery. He also preached the Regula virginum ("Rule for Virgins"), the first set of rules specifically for women in convents/monasteries. He called women who joined cloistered groups "gems of the church" who "with God's help, evade the jaws of spiritual wolves." To do so, of course, they had to be separated from society through claustration. Claustration meant they were not to interact with the non-clergy at all: there would be walls or bars or grills physically separating them always from those not members of their order. He established a monastery exclusively for women in Arles, with the hope that their prayers would aid him in entering heaven. The first abbess of the monastery? His sister, Cæsaria.

Cæsarius was born around 468/470 CE and died 27 August 542. It was a time when the early church was still finding agreement on doctrine. As the bishop of Arles, he presided over the Council of Orange that ratified some doctrine and fought yet another heresy. I'll tell you about it next time.

Email ThisBlogThis!Share to TwitterShare to FacebookShare to Pinterest
Labels: Cæsarius of Arles, Council of Orange, monasteries