The Origin of the Grail, Part 2 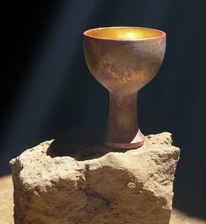 In Part 1 we learned that the first mention of the grail was as a miraculous serving dish. The day before we learned that Robert de Boron linked the grail to the cup used at the last Supper. Around the same time, German poet Wolfram von Eschenbach (c.1160 - 1220) had a very different idea about it.

von Eschenbach based his epic Parzival on Chrétien's Perceval. Parzival is sheltered by his mother from thoughts of knighthood, but three passing knights convince him to seek out Arthur's court. She dies after he leaves. His time at Arthur's court mirrors Chrétien's version somewhat, in that he defeats a knight, leaves and learns chivalry from a mentor, and becomes the guest at the castle of Anfortas, the Grail castle. Anfortas warns him not to be too curious, so he does not ask Anfortas about the strange wound he has or about the array of wondrous objects paraded before him. He awakens the next morning to an abandoned castle, leading him to think the night before was all illusion caused by evil spirits.

There is much more afterward, but regarding the procession of objects seen by Parzival: one of the objects is a stone, about which von Eschenbach tells us der stein ist ouch genant der gral ("the stone is also called the grail"). It is carried, preceded by candles and balsam incense, in a green silken cloth by a beautiful lady with the name "Overflowing Happiness." It is the stone of the phoenix, and connected with the power of resurrection. Every Good Friday, a shining white dove flies down to it with a Communion Host in its mouth, placing the Host on the stone to renew its power. Only the baptized can see the Grail. When Lucifer rebelled against God, the angels who did not take a side went to the stone. The stone is wide enough to be written on. Later in Parzival the titular character's name appears on the stone, marking him as the new Grail King.

There is more. von Eschenbach's interpretation of the Grail has provided fodder for many many years for scholars wishing to understand his meaning. After him, however, the Middle Ages settled on the cup from the Last Supper and made the Grail a central motif for quests involving the Arthurian Cycle.

Of course, since the cross on which Christ was crucified had been found years earlier, there was no reason to believe that the cup from the Last Supper had not survived. A 7th century pilgrim had claimed the cup was displayed in Jerusalem. In the late 12th century, a copy of the grail was supposedly looted from Byzantium and taken to Troyes; it was lost during the French Revolution. The Genoa Cathedral has a green glass dish supposedly used at the Last Supper. The Holy Chalice of Valencia appeared in 1399 but purports to be older. There is also the Nanteos Cup, a wooden bowl found in Wales, a glass dish found near Glastonbury, and a 6th century chalice called the Antioch Chalice. All were linked to the Grail legend, (without evidence).

Glastonbury, of course, is the place where (according to Robert de Boron) Joseph of Arimathea sends the Holy Grail. What was so special about it? Let's see what we know...next time.