The Dream of a United Italy 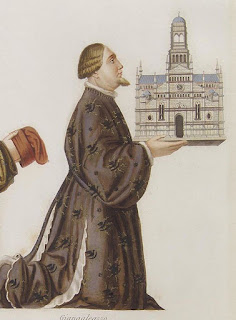 Italy was not unified as a country until 1861; before then, the separate regions/cities saw themselves as unique sovereign entities. This led frequently to rivalries that could become wars, but many often looked back to the glory of Rome, when such wars did not happen.

Gian Galeazzo Visconti (16 October 1351 - 3 September 1402) was the first Duke of Milan. He himself made Milan into a duchy in 1395, after being granted the title of duke from Wenceslaus IV of Bohemia (after paying Wenceslaus 100,000 florins).

He was lord of Milan earlier, a position he gained by overthrowing his uncle Bernabò. He did this by faking a religious conversion, inviting Bernabò to a celebratory ceremony, and capturing him; Bernabò was imprisoned, but not for long: his death came in short order, supposedly from poison.

He brought the same ruthless efficiency to conquering Verona, Vicenza, and Padua (he spent 300,000 florins to divert the course of the River Brenta that supplied Padua with water and transportation). He wanted to unite all of northern Italy, re-creating the old Lombardy. Of course, he wanted to unite it under himself, which did not sit well with some city-states such as Bologna and Florence. Still, the hope of a powerful empire on/of Italy inspired poets and politicians. One modern website reports:

Poets talked again of “un solo re,” the King above race and party, who would bring back the Roman peace and turn the cities from their path of fratricidal war; patriots feared the engulfing of those cities within the belly of the Viper.

The hopes and fears were centred upon one man, Giangaleazzo Visconti, Count of Virtue and first Duke of Milan, the greatest of a family that had been climbing to the position of supreme power in Lombardy for over a hundred years. It was said that the Duke had taken the Iron Crown from its safe-keeping and was preparing his coronation robes. [link]

Italy might have done worse. Visconti was more than just a power-mad potentate. He built monasteries and continued the work on the cathedral of Milan. At Visconti Castle he expanded the library's scientific papers and illuminated manuscripts. He may have created the "first modern bureaucracy" in that he established a department for the purpose of improving public health.

Health was to be his undoing. Shortly after subjugating Bologna, and with Florence failing against his attack because of problems with famine and disease, he fell ill to a fever. He died on 3 September 1402. An extraordinary statesman who might have, given another several years, made the peninsula a force to be reckoned with instead of a series of separate states.

But what about the hapless Bernabò? It's easy to see him as just a stepping stone to power for Gian Galeazzo, but there must be more to his story...and there is, including a link to my favorite English poet. This next one may have lots of links to previous posts.