How To Get There - Maps 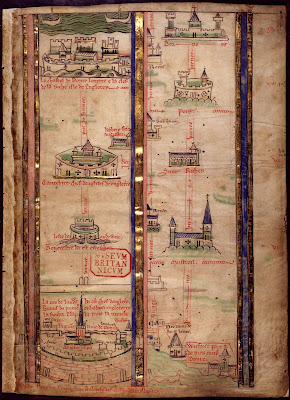 The Middle Ages did not have maps the way we think of them. Or rather they had maps, but not for the purpose we would think of them. There were some general purpose maps that tried to show the world, or the country; maybe even a town. But a map you could use to travel from place to place easily?

Travel from village to village would be simply. You'd ask for directions from someone who'd been there. The lack of Welcome signs at the border of towns meant you should simply as the people you run into if you have reached the intended town. There might not even be a road or path; the directions might be "over the hill" or "follow the river downstream."

To get from one place to another, often the directions were simply an itinerary, a list of the towns and landmarks along the way. Some of these exist, such as the manuscript of Archbishop Sigeric of Canterbury, who visited Rome in 990; his list of churches and the route he followed is in the British Library. Many of these itineraries would probably be used once and tossed away.

Also in the British Library is the manuscript illustrated here. It is by Matthew Paris, and shows how to get from London to Rome with sketches of the places along the way!

Some trips were made solely to visit holy shrines, such as the famous shrine of St. James in Santiago de Compostela in Galicia. These places were visited by so many people that you could more easily find directions as well as traveling companions.

I want to take a closer look at Sigeric next.