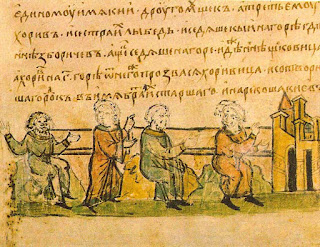 Kyiv is one of the oldest cities in eastern Europe. Humans lived there since the Stone Age, and from the Iron Age there is evidence of animal husbandry and trading with inhabitants of the Black Sea coast. Roman coins found dating to the 2nd through 4th centuries CE are evidence of wider trading.

The Primary Chronicle, that tells the history of the Kievan Rus peoples from about 850 to 1110, tells the story of four siblings: the brothers Kyiv, Shchek, Khoryv, and their sister Lybid. They founded the city around 485, and named it after Kyi. The family was part of the Khazar Empire, a semi-nomadic Turkic group that was covered parts of Russia, Ukraine including Crimea, and Kazakhstan. The Primary Chronicle has residents of Kyiv saying "there were three brothers Kyi, Shchek, and Khoriv. They founded this town and died, and now we are staying and paying taxes to their relatives the Khazars."

Another tale is that Saint Andrew passed through the area and set up a cross to mark where a church would be built. St. Andrew did not leave a lasting mark, though, since in the Middle Ages St. Michael's image became linked with the city.

There is another saint linked to Kyiv, about whom I wrote years ago. You really need to click this link.

Kyiv was on the trade route between Greece and the Varangians to the north, which helped its prosperity. By the year 1000CE its population was about 45,000, rising to about 100,000 by the beginning of the 12th century. Prosperity made it a target, however. It was attacked in 968 by the nomadic Pechenegs. In 1169, Grand Prince Andrey Bogolyubsky sacked the city and destroyed the royal palace. In 1203 Prince Rurik Rostislavich burned the city. In 1240, the Mongol invasion again destroyed the city. In the 1320s, Grand Duke Gediminas and a Lithuanian army conquered Kyiv. In 1482, Crimean Tatars sacked and burned it again. And then, of course, World Wars I and II took their toll. Through all this, it has survived.

Tomorrow, as promised, back to Gian Galeazzo Visconti.