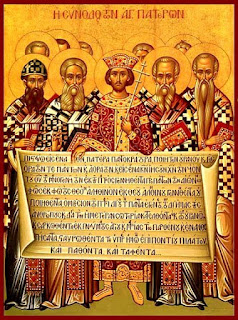 The winds of change blew quickly for christians in the Mediterranean in the early 4th century. Emperor Diocletian had persecuted christians pretty successfully—those who gave in and turned over their copies of Scripture were labeled traditors, and opposition to them became the Donates movement—until he retired in 305CE. After 305, the emperor was Gaius Galerius Valerius Maximianus, who continued the Diocletian persecutions until 30 April 311, when he issued the Edict of Toleration, which declared Christianity as a religio licita ("approved religion")

I should mention that, at this time, the Roman Empire was split in half, with an Eastern and a Western Empire. Though they had distinct cultural differences, they endeavored to stay united as an empire. Therefore, it came as no surprise when Licinius, ruler of the Eastern Empire, came to Milan to Constantia, the younger half-sister of Emperor Constantine of the Western Empire. This happy occasion, in February of 313, was ideal for the two imperial personages to spend time together and discuss business along with pleasure.

Constantine had some business to discuss. Several months earlier, on 28 October 312, he had defeated a rival for the throne at the Battle of Milvian Bridge. According to one chronicler, Eusebius of Caesarea (mentioned most recently here), Constantine saw a cross of light above the sun and the Greek words Ἐν Τούτῳ Νίκα ("in this (sign), conquer"; usually given as the Latin in hoc signo vinces, "in this sign you will conquer."

They painted the chi rho, the first two letters of Christ's name, on their shields. Constantine's forces won, and he declared he would convert to Christianity. Full disclosure: he did not convert until he was on his deathbed, according to Eusebius, who cannot always be trusted; he died 22 May 337.

But back to the Edict: Constantine and Licinius issued a joint statement that according to some reports (an actual document does not exist) says:

When we, Constantine Augustus and Licinius Augustus, met so happily at Milan, and considered together all that concerned the interest and security of the State, we decided ... to grant to Christians and to everybody the free power to follow the religion of their choice, in order that all that is divine in the heavens may be favorable and propitious towards all who are placed under our authority.

Emperor Constantine is often described as having made Christianity the official religion of the Roman Empire. This document does not do that. He did try to make sure Christianity was uniform and understandable, so in 325CE he called the first Council of Nicaea which established the Nicene Creed as opposed to Arianism. Also, his mother did all she could to promote Christianity. It would be another 43 years before Christianity pushed out the Roman religion, but that's a story for tomorrow.
Posted by Daily Medieval at 7:00 AM