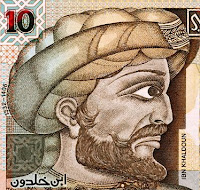 That is an odd headline (and topic) for a blog on the Middle Ages, but let's push on and see where we wind up. The Laffer Curve (named for Arthur Laffer, illustrates a "a supposed relationship between economic activity and the rate of taxation which suggests that there is an optimum tax rate which maximizes tax revenue." [New Oxford American Dictionary] Arthur Laffer acknowledged that Ibn Khaldun essentially defined what we now call the Laffer Curve in his best-known book, Al-Muqaddimah ("Introduction").

We know quite a bit about Ibn Khaldun (27 May 1332 - 17 March 1406) because he wrote an autobiography. Born to a wealthy Arabic family, he was able to trace his ancestry back to the time of Mohammed. He had a classical Islamic education, memorized the Koran, and studied law and Arab linguistics. He also learned mathematics, logic, and philosophy. While in his teenage years, both parents died in the first big wave of the Black Death.

He started his political career at the age of 20 in Tunisia, producing fine calligraphy on official documents, but shortly after moved to Fez as a writer of royal proclamations. There he fell out with the sultan while scheming to advance himself and went to jail for 22 months. After getting out, he was not getting the attention he felt he deserved in terms of jobs, and decided to move to Granada. The Sultan of Granada gave him a diplomatic mission to King Pedro the Cruel of Castile, which Ibn Khaldun carried out successfully. Eventually getting involved in too much political intrigue, he left for Ifriqiya, where the current sultan had been Khaldun's cellmate! The sultan made Khaldun his prime minister. In 1366, that sultan died, and Khaldun allied himself with a different sultan, who was defeated a few years later, upon which Khaldun decided a monastic life was best. He continued to get involved in politics, however, always finding ways to anger someone.

Regarding his works, Al-Muqaddimah was the first part of a seven-volume work that included a world history up to his time. The socio-economic-geographical approach to describing empires is considered by 19th and 20th century scholars as the first ever writing in the social sciences. Khaldun explains that there is a group solidarity that enables small groups to grow in power, and yet become their own worst enemy and eventually fall from power and be overcome by another tightly knit group. He had similarly ahead-of-his-time ideas about economics.

I will leave the discussion of Ibn Khaldun (for now at least) with one more thing: his apt description of government as "an institution which prevents injustice other than such as it commits itself."

A large part of his historical work involves the Berbers, and I will talk about them in the next post.