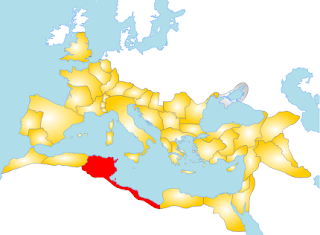 Along the Mediterranean coast of Northern Africa was an area controlled by the Roman Empire called the Africa Proconsularis. When the Empire broke up, the Byzantine Eastern Empire still controlled the territory until the Muslim Empire started its westward move, ultimately reaching the Iberian Peninsula.
To be clear, Islam existed in the area already, but Muslims did not have political control until the Umayyads took over in 703CE. Ifriqiya included modern Tunisia, eastern Algeria, and western Libya was then known as Ifriqiya (shown here in red).
Control shifted from dynasty to dynasty: from Umayyads to the Aghlabids (who were regents for the Abbasids) to the Fatimids in 909, to their own regents, the Zirids, who slowly grew in power, then to the Almohads and finally the Hafsids. The capital city was Kairouan, or al-Qayrawān, founded in 670 by the Umayyads. It became an intellectual and cultural center for Sunni Islamic scholarship. Charlemagne sent envoys to Kairouan; they returned with reports of the amazing palaces and gardens, not to mention reports of the heavy taxation of the population that paid for the excesses of the ruling class.
Several mosques in Africa are the result of Muslim influence spreading out and southward from Ifriqiya. Swahili absorbs vocabulary from many languages, most recently English, but 16-20% of its vocabulary still is from Arabic, especially administrative terms.
Notable individuals from Ifriqiya include Constantine the African (mentioned in a recent post), and the historian Ibn Khaldun, who would be worth taking a closer look at in the next post.
Posted by Daily Medieval at 7:00 AM