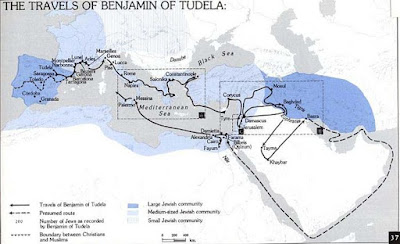 I wrote a post about Benjamin of Tudela (1130-1173) back in 2012, but there is a lot more to him. His Masa'ot Binyamin (Travels of Benjamin) details eight years of traveling, and gives western scholar greater insight than we otherwise would have into Jewish (and other) inhabitants east of the Mediterranean. He frequently notes the mutual respect found in mixed communities of Jews and Muslims.

Here is a sample from early in his book (parasang is a Persian unit of distance of about 4 miles):

From Montpellier it is four parasangs to Lunel, in which there is a congregation of Israelites, who study the Law day and night. Here lived Rabbenu Meshullam the great rabbi, since deceased, and his five sons, who are wise, great and wealthy, namely: R. Joseph, R. Isaac, R. Jacob, R. Aaron, and R. Asher, the recluse, who dwells apart from the world; he pores over his books day and night, fasts periodically and abstains from all meat. He is a great scholar of the Talmud. At Lunel live also their brother-in-law R. Moses, the chief rabbi, R. Samuel the elder, R. Ulsarnu, R. Solomon Hacohen, and R. Judah the Physician, the son of Tibbon, the Sephardi. The students that come from distant lands to learn the Law are taught, boarded, lodged and clothed by the congregation, so long as they attend the house of study. The community has wise, understanding and saintly men of great benevolence, who lend a helping hand to all their brethren both far and near. The congregation consists of about 300 Jews—may the Lord preserve them.

All in all, he visited about 300 cities and many Jewish communities. His book contains one of the earliest descriptions of the ancient site of Nineveh. He also writes about the Al-Hashishin, the order of assassins who lived in the mountains of Persia and Syria. Maybe it would be interesting to look into them a little more tomorrow.

You can read his book at Project Gutenberg.