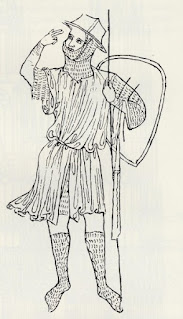 Who was Villard de Honnecourt? He mentions in his sketches that he had been to many lands, including spending several days in Hungary. He doesn't tell us why he was there, but a theory has arisen. One of the radiating chapels in the new chevet of Cambrai Cathedral as dedicated to St. Elizabeth of Hungary. It is possible that Villard was there to obtain a relic of the saint for the cathedral. Elizabeth died in 1234 and was canonized 27 May 1235 by Pope Gregory IX (canonization in those days wasn't as rigorous a process as it is today). Ten miles south of Cambrai Cathedral is the village of Honnecourt. Villard may have been an architect/engineer for Cambrai.

It is entirely possible that he was tasked with traveling to procure a relic, and used the opportunity to make sketches along the way. Not only did he record architectural details and draw machines, he also drew subjects "from life."

Some of them are figures of saints or Christ, likely taken from art, but some are obviously activities of real people. The first illustration here is a soldier at rest. We get some idea of what a soldier would wear; we see what looks like chainmail under his tunic, along with a chainmail coif. Unlike the simplified straight lines of his machine drawings, here we see attention to the detail of folds and pleats in the fabric.

Another interesting sketch from life is the wrestlers. 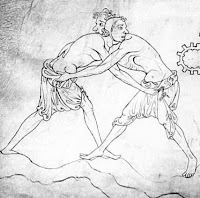 Is it a serious bout, or just two friends playing? We will never know, especially because he doesn't even caption this, as he usually does with his sketches. The regular design cut off on the right side of the illustration is part of Cambrai Cathedral: This is the plan of the apse and the choir (chevet) of Our Lady of Cambrai as it is now rising from the ground.

This page has been turned sideways so that he can include the wrestlers, but as much as he cared to represent them carefully—the folds of their loincloths, the contours of their bodies—it was just an idle addition. 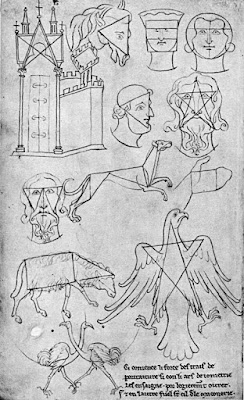 He was, however, interested in demonstrating how to draw from life. Some of his sketches show the geometry and symmetry of the human body and face, as a guide to drawing. In the drawing below he endeavored to show how easy it was to find the proper proportion in drawing from life.

His caption reads: Here begins the method of representation as taught by the art of geometry, to facilitate work.

On a page of the twelve apostles (and three other figures, he writes: Here you will find the images of the the Twelve Apostles, sitting. Villard de Honnecourt greets you and begs all who use the devices found in this book to pray for his soul and remember him. For in this book will be found sound advice on the virtues of masonry and the uses of carpentry. You will find strong help in drawing figures according to the lessons taught by the art of geometry.

The illustration to the left shows that he wasn't just interested in people. He had quite a few sketches of animals, and one species in particular (besides the occasional horse) was of such interest that he stressed to the viewer that it was "from life" and not imagination. But that is tomorrow's topic.
Posted by Daily Medieval at 7:00 AM