Aristotle in the Middle Ages 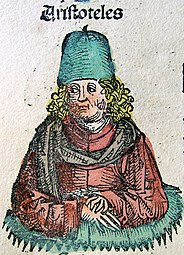 We do not know very many details about Aristotle's life: he was born in northern Greece about 384BCE; at the age of 19 he joined Plato's Academy. After Plato's death, he became a tutor to Alexander the Great at the request of Alexander's father, Philip II of Macedon.

Only about a third of his known works survive, but his literary output was extensive. For centuries his name was known to European scholars, but his writings were not. Copies were scarce, and were in a language unknown to most Europeans. He was known to Arab and Jewish scholars, and it is thanks to their translations that the works of Aristotle were brought to Western Europe. Aristotle's Organon, in a Latin translation by Boethius, was practically the only work available to Western Europe from 600 to 1100CE. This was a collection of six books by Aristotle on logic, and gave to the world the syllogism.

The 11th and 12th centuries saw Aristotle become better known through the translations from Arabic by folk like Gerard of Cremona at the Toledo School of Translators. Thomas Aquinas' Summa Theologica ("Summary of Theology") referred to Aristotle as "The Philosopher" which increased the demand for his works. Aristotle's philosophical ideas were adopted and adapted into Christian theology. Maimonides, Dante, Chaucer, Albertus Magnus, and many others all knew and revered Aristotle.

In Aristotle's Metaphysics he asserts that everything must have a cause. Something causes something else: the candle flame flutters because we breathe on it, the breath comes from our lungs, the lungs work because we inhale and decide to blow at the candle, etc. He posits that, at the origin of all activity there must be an "unmoved mover," a thing that moves without being moved. He does not call this God, but claims it must be perfectly beautiful, indivisible, contemplating perfection, which is to say a self-contemplating intellect.

Maimonides and Aquinas and others knew, of course, what this was, and revered the pagan Aristotle for proving the existence of the First Cause, God. So what could the problem be with Aristotle and Christianity? A brief stop next at the life and works of Averroes and we will have representative Jewish, Christian, and Muslim philosophers to look at the question: is God logical?

Posted by Daily Medieval at 8:01 AM