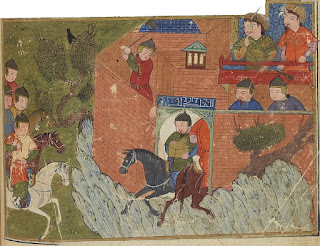 After Hassan i-Sabbah took over Alamut Castle from the Justanids, he went about making it a place that his followers would be willing to die for.  He also refurbished it as a place that would keep people alive for a long time, in case of a siege. Part of the refurbishment—besides fortifying the walls—was to line rooms with limestone to make them more suitable to food storage.

Hassan had the slopes below the castle terraced, and enhanced the irrigation, so that more food could be grown. Barley, wheat, and rice were important crops, suitable for safekeeping for long periods of time in case an attack was made.

He also built a library so extensive that scholars from far and wide came to stay awhile and read. Scientists could do research and experiment. The library had astronomical  instruments and countless books. Because i-Sabbah was interested in many different philosophies, pulling what he liked best from different schools of thought, intellectual freedom was prized, and lively debate encouraged.

To create an idea of paradise on earth, gardens were built and maintained. Marco Polo referred to the Isma'ili "secret garden of paradise." He described a ritual in which young men were drugged, taken to the garden where they would wake up surrounded by beauty and attractive women, then told by an old man that this was their ultimate reward if they served the Nizari Isma'ili cause. Polo's report is the origin of the "Old Man of the Mountain" title for Hassan i-Sabbah as the leader of the assassins.

Modern scholars, however, believe that stories of the gardens are just that, and there was no contemporaneous mention of gardens and drugging young men, not even by Mongol authority who visited Alamut to critique it.

Yes, Mongols enter the picture. The Mongol Empire expanded westward and clashed with the Islamic Empire. The Nizari Isma'ili state stood in their way. In the 1200s, this had grown to scores of fortresses. To be brief: Alamut was besieged more than once. It finally was taken by the Mongols in 1256, recaptured by Nizari Isma'ili's in 1275, then re-recaptured by the Mongols in 1282, which was the end of the Isma'ilis.

It was under Möngke Khan that this happened, a grandson of Genghis. I'll tell you more about him next.