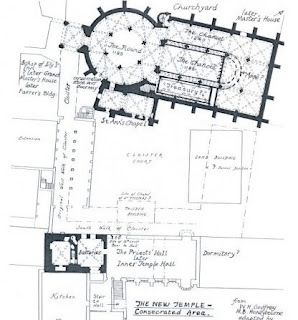 Why were two of the compounds for legal training in London named "Inner Temple" and "Middle Temple"? First, let's explain that "Middle Temple" was a nickname. There was an Inner and an Outer Temple at the location, and "Middle" was named that just because it was between the two, but it wasn't really a temple. The Inner Temple, however, was a temple, in that it was built and used by the Poor Fellow-Soldiers of Christ and of the Temple of Solomon, known these days as the Templars.

Founded in 1119CE and devoted to the emancipation of the Holy Land, their international presence made them popular as safe escorts and money-handling institutions. They maintained almost a thousand locations across all of Europe and the Near East, and were a popular recipient of donations.

During the reign of Henry II, the Knights built their set of buildings on the banks of the Thames, laying down a new street that gave access to them. They called this New Street, but today it is known as Chancery Lane. It was obviously not a law school at the time, although lawyers were there as advisors for the Knights.

The Knights ran into trouble when, on 13 Friday 1307, France ordered the arrest of all Templars. (If the date makes you wonder, go here.) King Philip IV needed money after his wars with England, and relied on rumors of impropriety to convince Pope Clement V to outlaw them, allowing Philip to confiscate their wealth. England did not have any beef with the Knights, but their order faded quickly and was officially dissolved in 1312. The buildings in London were given to the Knights Hospitaller, an order whose activities were similar to the Templars.

You can read more about Clement's decision here, and why he was so aligned with Philip to go along with him here. I want to talk a little more about the Inner Temple and what happened to it later. See you next time.