The Order of Assassins 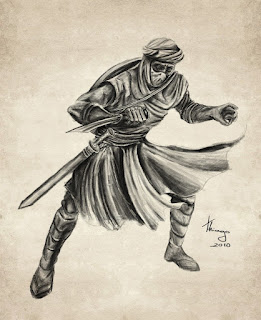 We cannot talk about the Order of Assassins without talking about the word "assassin" and its origin, and you may be surprised to learn that 1) the origin is not what you've been told, and 2) I've already gone over this. In fact, the founder of the Order referred to his members as Asāsiyyūn (or أساسِيّون), "people who are faithful to the foundation [of the faith]." The hashish derivation was added later by Europeans who did not know the whole story.

With that out of the way, we can discuss their origin more calmly. They were originally called the Nizari Isma'ili State, founded by Hassan i-Sabbah. Sabbah (c.1050 - 12 June 1124) was a Twelver Shia, called thus (in English, anyway) because they believed in twelve divinely ordained imams who are the spiritual successors to Muhammad.

Sabbah was strongly Twelver, but later in life embraced the Isma'ili doctrine. The followers of Isma'ilis believed that Isma'il ibn Jafar was the proper spiritual successor to Imam Ja'far al-Sadiq; other Twelver Shia believed Isma'il's younger brother, Musa al-Kadhim, was the true Imam. Sabbah further made "different choices" in Cairo when he gave his support to Nizar, the son of Isma'ili Imam-Caliph al-Mustanṣir, as the next Imam. Sabbah was jailed by the chief of the army, but the collapse of one of the jail's minarets was taken as a sign to get rid of him: he was therefore deported. He wound up in Isfahan in 1081.

Sabbah decided he needed a stronghold where he could found the Nizar Isma'ili State, maintain his own safety, instruct others in his beliefs, and from which he could conduct his mission to spread the word of his specific beliefs. In 1090 he and his followers captured Alamut Castle, the first and greatest of the Nizari Isma'ili fortresses. From here he used his Order of Assassins to covertly eliminate leaders—first Muslim, later Christian as well—who stood in the way of spreading his version of Islam.

The way he conquered Alamut Castle, and the castle itself, deserve more than a passing glance. I'll tell you about it tomorrow.