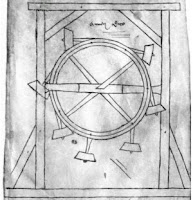 I've mentioned Villard de Honecourt back in 2012; he is so worth another look. Anything we know about him is entirely incidental. Around 1225-1235, he traveled around Europe, and went as far as Hungary, sketching artwork, buildings, machines, animals and other items of interest to him along the way—250 separate items sketched in all. His sketches have prompted us to assume he was an engineer and/or architect. (Panofsky obviously assumed architect; see the previous post.) He sketched various figures that were clearly on the facades of cathedrals, as well as floor plans and elevations of cathedrals. He had a fascination for machines, however.

One of his drawings, pictured here, is for a perpetual motion machine. He has captioned it: Often have experts striven to make a wheel turn of its own accord. Here is a way to do it with an uneven number of mallets and with quicksilver.

He also made simplified drawings of a machine for cutting the tops of piles under water when creating a pier, for straightening a sagging house, for bracing the spokes while making a wheel, and more. And here's another set of machines. 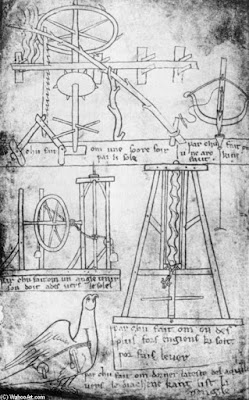 Starting from the top, his notes describe a saw that operates itself, a crossbow that won't miss, engines for lifting heavy weights, and how to make an eagle that turns toward the deacon when he preaches.

Despite the above implication that you can learn a lot from his drawings, an early theory that he intended these drawing as teaching tools has been dismissed since, other than the drawings themselves, there are no details regarding construction or operation.

His collection passed through various hands, some of whom have written their names on pages, and eventually came into the possession of the Bibliothèque National de France in the winter of 1795-96. If you want to purchase a facsimile edition, or at least view a brief video of one, click here.

I think some of his sketches taken from life should get some exposure. See you tomorrow.