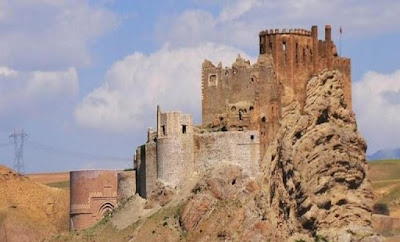 Modern gamers (of which I am not one) are familiar with "Assassin's Creed"; they may even know it was based on a 1938 novel, Alamut. The novel told the story of Hassan i-Sabbah, who was the subject of the previous post.
Alamut is in present-day Iran, a high peak with an eagle-eye view of the surrounding area. The fortress was founded in 865CE when a Justanid ruler watched an eagle perch on it. He built the fortress, which was called Aluh āmū[kh]t, meaning "Eagle's Teaching or "Nest of Punishment"; most stories now abbreviate that to "Eagle's Nest." The Justanids were an Iranian Shia dynasty, and it remained in their hands until Hassan i-Sabbah conquered it in 1090 to use as a base for his Nizari Isma'ili Nation. This is how he did it.
Sabbah had been hiding out about 60km away, avoiding arrest for the trouble he had been causing with his new religion. In 1090, deciding that Alamut was an ideal location for his base, he sent supporters to the region to live and work in the village below the castle, and to seek employment in the castle itself. Sabbah traveled secretly to the area, and disguised himself as a teacher, secretly preaching and befriending locals.
The lord of the fortress, Mahdi, had been summoned to the capital and given orders to find and arrest Sabbah: rumors had arisen that Sabbah was in the Alamut area. Returning to the castle, Mahdi remarked that there were several new faces, and was told that illness had caused the hiring of new staff. (It is believed that Mahdi's deputy had become a follower of Sabbah.) Soon, Sabbah himself approached Mahdi, declaring the castle now had changed hands. The guards refused to follow Mahdi's orders to arrest Sabbah. Mahdi was allowed to leave safely, and given 3000 gold dinars as the price for the castle. The castle had been taken without bloodshed.
What Sabbah did next is an even better story. See you tomorrow.
Posted by Daily Medieval at 7:00 AM