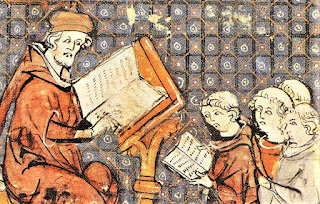 Around 1100CE, monastic schools started to discover the works of Aristotle, thanks to Judea-Islamic translations. Just as scholarly study was taking off in Western Europe, suddenly a body of knowledge that included a system of logic and was accompanied by a name of tremendous reputation. (One wonders what might have developed on its own if Aristotle hadn't appeared to offer them a "mold" to fit.)

Now scholars had a framework for studying the world, and by that I mean God. After all, among all the potential different opinions and ideas philosophers might have had, there was one constant: a supreme Being existed whose existence explained all things. Philosophers/Theologians from the Christian and Jewish and Muslim traditions—all children of Abraham—all agreed that everything came from God, and here now was the most prestigious pagan thinker "agreeing" with his logical conclusion that everything came from the Unmoved Mover, the First Cause.

Maimonides felt that philosophy/logic and religion were not opposing modes of thought; they should both lead to the same truths. You remember from several posts ago that he considered it appropriate to describe God in terms of what He was not. "God is not non-existent"; "God is not ignorant"; et cetera. This method is called apophatic. He also said "God is not corporeal" because to describe God—who was of course to be worshipped—as having a body would be a step toward idolatry, to which Maimonides was opposed. This got him into hot water with those scholars who took Genesis 1:26 seriously: "Let is make man in our image." He was condemned, and some wanted him excommunicated.

Averroes came under fire because he also considered philosophy an alternate but equal-to-religion way of finding truth that cannot contradict revelations in Islam. He believed that any contradictions should be resolved by understanding that the revelations in Islam about God must have been interpreted wrongly, and would need to be re-examined using philosophy. This flew in the face of fundamentalism; critiques of philosophy like The Incoherence of the Philosophers denounced people like Averroes. In 1195 his teachings were condemned, his works were ordered burned, and he was banished (although he was returned to court shortly before he died, on 11 December 1198).

Aquinas caused raised eyebrows because of Aristotle and Averroes. Introducing their ideas from non-Christian sources was a very controversial move. When Aquinas was made regent master at the University of Paris, he was accused of encouraging Averroists by a Franciscan master who considered certain more free-thinking philosophers as "blind leaders of the blind."

So philosophers and theologians who centuries later are heralded as giants in the field whose works are considered foundational were not universally respected or followed in their own time.

A little more on Scholasticism next time, and then maybe time for a lighter topic or two.

Posted by Daily Medieval at 8:00 AM