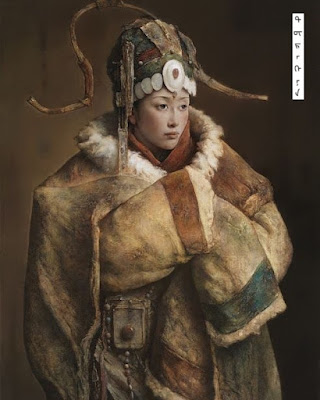 Toregene (pictured here, with her name in Mongolian) has been called one of the most powerful women in history. Born into the Naiman tribe (in western Mongolia), and married into the Merkit tribe, when Genghis Khan conquered the Merkits he singled her out and gave her to his sone Ogedei. Ogedei was already married, but to a woman who bore him no sons. Toregene bore Ogedei five sons, including Guyuk.

Toregene was ambitious, and assumed more and more authority in the court, aided serendipitously by Ogedei's alcoholism. (When his brother Chagatai appointed someone to watch Ogedei's intake, Ogedei promised to drink fewer cups each day; he then had cups made that were twice the size of regular ones.) When Ogedei died in 1241 after an all-night drinking session with his friend and advisor Abd-ur-Rahman, one of his other widows, Moge Khatun (she had been a wife of Genghis, but then was given to Ogedei), took over administrative duties.

But not for long. Toregene was named regent in spring of 1242 as Khatun (the feminine of "Khan"). She dismissed Ogedei's ministers and placed her own favorites in power. Some of them she arrested, unless they fled first. One of her more controversial appointments was Fatima. Fatima was a Shia Muslim captured from Persia, who started as Toregene's slave. Fatima became her constant companion and advisor.

Eventually she tired of her role and managed the ascension of Guyuk as Great Khan in 1246. She retired to an estate on the Emil River that flows through China and Kazakhstan.

One of her influences was changes to the tax system. She didn't like the centralization of authority that was the norm in her husband's administration, even though it had a practical purpose: reducing the need for revenue. She persuaded Ogedei to appoint Abd-ur-Rahman as tax farmer in China.

What does a tax farmer do? Good question. Answer coming soon.