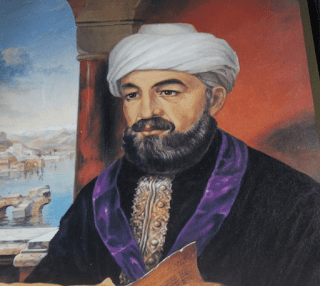 Moses ben Maimon (1138 - 1204) was a rabbi, a philosopher, an astronomer, and the personal physician of Saladin. (Saladin was most recently mentioned here, but you can learn more about him here.) Born in Córdoba (Spain), he became known far and wide as one of the most influential Torah scholars of his age.

When Córdoba was conquered by the Almohads in 1148, dhimmi (explained here) was status was abolished, and therefore Jews and Christians had to choose to convert to Islam, be put to death, or go into exile. Maimonides' family chose exile. He spent some time in Fez, Morocco, and then wound up in Cairo.

While living in Egypt, he composed the Mishnah Torah ("Repetition of the Torah"), gathering all of Jewish oral law in fourteen books. His other great work was the Moreh Nevukhim ("Guide for the Perplexed"), in which he expressed all his own philosophical views in three books.

Among his philosophical conclusions, found in numerous written works, are:

•The power of prophecy does not require intervention by God. Any human being, through the application of logic and reason, study and meditation, has the potential to become a prophet.

•On the "problem of evil"; that is, if God is good, how can He have created evil? Maimonides concludes that evil derives from human beings and their individual attributes, although all human beings can and should strive for higher purpose and forsake evil impulses.

•Regarding astrology, Maimonides stressed that one should only believe what can be determined through rational proof, physical evidence, or trustworthy authority. He studied astrology and concluded that it is ridiculous to think that your fate is tied to constellations, making you a slave to something over which you have no control.

•In a treatise on resurrection, he emphasizes that God would not violate the laws of Nature which He has created, and therefore any bodily resurrection would only be temporary; true resurrection to come is spiritual.

There is so much more to say about him that I want to turn next to his Guide For the Perplexed.

Posted by Daily Medieval at 9:34 AM

Email ThisBlogThis!Share to TwitterShare to FacebookShare to Pinterest
Labels: Maimonides