We're talking about Villard de Honnecourt, who traveled Europe and Hungary between 1225 and 1235 (at least), sketching along the way. As well as buildings (especially churches), machinery, and people, he sketched a lot of animals. Some were studies in how geometry helps to draw. Some were animals for their own sake. 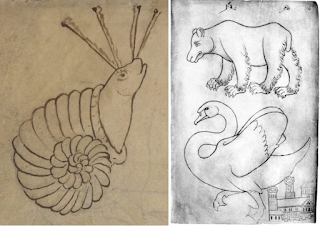 For instance, here's a snail that was added to the page on which the soldier from the previous post was found. And a bear and a swan on their own page. Just under the swan's tail is a church he wanted to sketch, but the swan was more important?

He sketches horses on more than one page, and there are numerous small creatures: there's even a page of insects.

There is one animal that he draws more than once, and one of the drawings gets a whole page to itself. I'm talking about the lion. 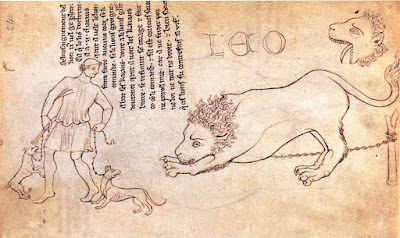 It would probably be more appropriate to say a lion, because I cannot imagine he ran into more than one. In the image to the left we see a lion tamer. Villard's note makes sure you know that this is "from life."
The term he uses that is translated "from life" is the Medieval French contrefait. If that word looks familiar even to non-French speakers, that is because it is the origin of the modern word "counterfeit." Don't be alarmed that it seems to contradict what he said about "from life": contrefait did not have the same connotations. It meant (and still means) to imitate. Modern parlance defines this is "not real." For Villard, it meant that he may not have been sitting there watching the event when he drew it, but he is imitating a factual thing. He is assuring us that this scene happened. We have no reason to doubt him. That does not mean that he observed this himself; just that he is adamant that it is real. He includes another picture in which he makes the same claim. 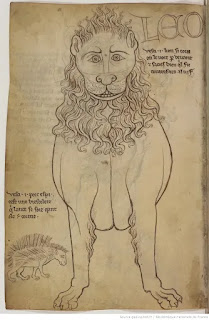 Lions in Medieval Western Europe would have been scarce or non-existent, appearing largely in literature and on heraldic designs, usually very stylized. Still, he was confident enough about the lion that he was sure he could draw it convincingly. Was there the possibility that he would have seen a lion in captivity? Or had the opportunity to look at one face-on so he could draw it?
Were there zoos in the Middle Ages? If there were, what were they like? Where did the animals come from?
Which all sounds like an excellent topic to explore next.
Posted by Daily Medieval at 7:00 AM