Guide for the Perplexed 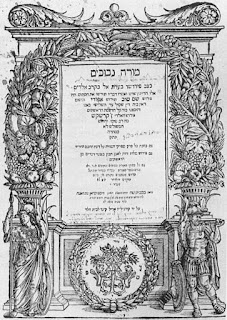 Maimonides' Guide for the Perplexed is available now in paper, digital, and audio form; in case you don't get around to ordering a copy, however, let me share some of the insights into his thinking. After all, he was one of the greatest minds in the history of Jewish scholarship.

Although he used the Hebrew alphabet to write it, the language was Arabic. It was written as a letter to a student, in three parts. It covers many topics, but here are a few.

In Book One, he goes into great detail arguing against anthropomorphism of God in the Bible. He argues against the idea that God has a corporeal form by analyzing every term used for God and explaining how it is used differently from how it is used in any context when referring to a physical person. He concludes that God can only be described in "negative" terms:

As to His essence, the only way to describe it is negatively. For instance, He is not physical, nor bound by time, nor subject to change, etc. These assertions do not involve any incorrect notions or assume any deficiency, while if positive essential attributes are admitted it may be assumed that other things coexisted with Him from eternity.

He also discusses the concept of creation ex nihilo (creation "from nothing"), and whether that idea was supported by scripture and reason. Aristotle's view that the universe is eternal is examined, but considered problematic.

Book Two starts with a discussion that occupied a lot of the medieval mind: the heavenly spheres. Maimonides links heavenly and earthly forces in a way that sounds like distillation experiments in high school science classes. The divine intelligence at the "top" of the universe filters downward through the spheres of the stars and planets (themselves intelligent) until it reaches the "bottom" layer, which is the physical world at the center of the concentric spheres, by which time it has diminished in power and divinity and animates the laws of nature.

The second part discusses the different kinds of prophecy. I briefly described his explanation of it in the previous post.

The first two books may sound intense, but the third raises the bar considerably. Among other things, he explains the vision of the chariot in Ezekiel as a parable of the cosmos, showing how descriptions of parts of it relate to how the natural world works. He also discusses omniscience, providence, the problem of evil (see the previous post), and the meaning we are to derive from episodes such as the Binding of Isaac and the trials of Job. He ends with a discussion of the 613 mitzvot ("commandments") found in the Torah.

Although his capacity as a philosopher was recognized and largely revered, not everyone was happy with his conclusions. Some of his conclusions contradicted the pronouncements of previous scholars. The notion that God was incorporeal was one such dogma. The Guide found fans among non-Jewish scholars, however, including Thomas Aquinas and Duns Scotus.

I find that Thomas Aquinas has been mentioned before in this blog, but never given his own entry. I think it's time. Tune in tomorrow.