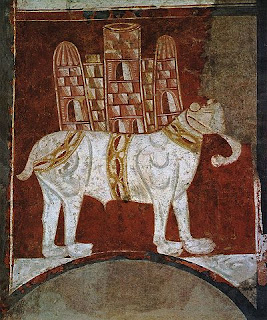 The Royal Frankish Annals cover the era from Charlemagne's grandfather to his son. In it we find that Caliph Harun al-Rashid gave an elephant to Charlemagne. This was the result of Charlemagne sending his emissary, Isaac the Jew (Isaac Judaeus), to open relations with the Abbasid rulers. Harun al-Rashid sent Isaac back with an elephant, named Abul-Abbas.

So how do you get an elephant from Syria to France? With great difficulty. From Baghdad Isaac took Abul-Abbas to Egypt, and then along the north coast of Africa to Tunisia. The going was slow, and Charlemagne received messages from Harun al-Rashid and from Ibrahim ibn al-Aghlab (governor of Africa, whom Isaac would have met in Tunisia) referring to Isaac's mission. Charlemagne ordered a man to Italy, to commission some ships in Genoa to travel to Africa to find Isaac and the elephant and bring them home.

Isaac and Abul-Abbas landed in Genoa in October 801, stayed for the winter, and when the weather turned they crossed the Alps. Isaac reached Charlemagne's court at Aachen on 20 July 802.

Abul-Abbas must have been a lot to maintain, but having the largest land animal anyone had ever seen in your menagerie would have been a great point of pride for Charlemagne. Elephants have long lifespans, and Charlemagne might have had his new pet for a long time, but on an expedition to Denmark in 810, after crossing the Rhine, Abul-Abbas died suddenly while Charlemagne camped at "Lippeham."

We don't know what the records mean by Lippeham, but on the conjecture that it has something to do with the Lippe River, it might be the city of Wesel. We will never know for sure, but there's a story that a colossal bone was found in the Lippe in 1750.

Much of what we know of Isaac the Jew has been revealed in the tale of Abul-Abbas. There was another "Isaac Judaeus," however, in the medieval records: one of the foremost Jewish physicians of his day. Let's take a look at him next time.

(The illustration here is of Abul-Abbas from 12th century Spain; the fresco is 80" high and 53" wide.)