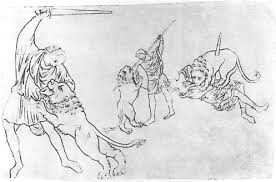 Collections of animals for private amusement or public display have existed for a long time. There is a current trend toward calling them "conservation parks" to move away from the connotations of 20th century zoos that housed animals with no regard to their natural habitats. "Zoo" itself was a shortened form of "zoological garden" or "zoological park" which were common in the 19th century. An early modern zoo, the London Zoo, opened in 1828 as the "Gardens and Menagerie of the Zoological Society of London." References to collections of animals earlier than the 19th century often use the term "menagerie" from the French ménage, "members of a household."

Pre-medieval evidence of menageries abounds in carved stone walls from Egypt and Mesopotamia, where we learn that rulers sent expeditions to collect giraffes, elephants, bears, dolphins, and birds. A Middle Assyrian Emperor had a collection of animals in the 11th century BCE. King Solomon had a menagerie, as did Nebuchadnezzar. Alexander the Great collected different animals from his expeditions and sent them back to Greece. The Romans kept various animals—bears and bulls for example—for entertainment in the Colosseum. (The illustration here is from Villard de Honnecourt.) Cortes destroyed a collection of animals maintained by Montezuma in 1520.

Caliph Harun al-Rashid sent an elephant as a gift to Charlemagne. Charlemagne created three menageries, and they included monkeys, lions, bears, camels, and falcons along with other exotic birds. Henry I of England had lions, leopards, and camels at his Woodstock palace. As early as 1204, "Bad" King John kept a collection of different animals at the Tower of London. The Tower had three leopards added when Holy Roman Emperor Frederick II sent them as a wedding gift to Henry III. The king of Norway sent a "white bear" (could they have subdued and sent a polar bear?) in 1251, and the king of France sent an elephant in 1254.

Clearly the desire to see exotic animals from distant lands (and the prestige of owning them) was of great interest for as long as human beings had the time and resources to collect and maintain them.

About Charlemagne's elephant, though...we've all heard about Hannibal trying to bring elephants over the alps to attack Rome. Bringing elephants to Europe predated Charlemagne by a millennium. What did it take to give an elephant to Charlemagne, and what happened to it? His name was Abul-Abbas, and I'll tell you about him next time.