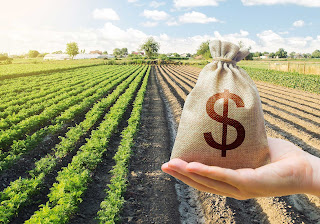 Let me start by saying that "tax farming" and a "tax farmer" are not really about agriculture, except in a tangential sense. In the medieval sense of "farming," the "farmer" did not own the land. The king owned all land, and the farmer worked it under an agreement. That agreement in France was called ferme générale, from the Latin firma, a fixed agreement or contract. So a "farmer" was one who worked the land under an agreement or a contract from the ultimate owner, the king.

Either that, or it comes from Old English feorm, "provisions supplied to the king" which became Middle English ferme, "farm, rent, revenue collected from farmer." Either way, the phrase is about revenue/material from someone lower on the status ladder to someone higher.

But "tax farming" is about (to use a modern phrase that borrows the same word) "farming out" (still, it involves a contract or agreement) the job of collecting tax revenue. An individual would pay the taxes of the whole area in one lump sum, then take on the task of personally recovering this revenue by collecting it from the inhabitants. The central government gets on-time payments from a reliable source, and the tax farmer bears the burden of collection. Of course, the tax farmer could exploit the system and try to collect more than his fair share.

The Romans in 123 BCE set up a system like this. The collectors were called publicani; Matthew the Apostle was one. Feudal England's kings would grant "in fee farm" to a noble, tasking them with a standard payment, and leaving them to tax the inhabitants themselves. In Egypt, Maimonides excommunicated Chief Rabbi Sar Shalom ben Moses for tax farming. The Ottoman Empire used tax farming from the 1400s until it was abolished in 1856.

Tax farming had the advantage for a government of not requiring a large tax collection agency that needed to be paid and regulated. If the central government received its revenue regularly, it did not have to worry whether citizens were getting taxed too much or too little. It had the disadvantage of creating a system that could lead to abuse of those taxed. Also, a tax farmer could collect goods, devalue them as part of their assessment during collection, and then turn around and sell them at a higher price. He could also force the inhabitants from long-term stability to short-term higher-yield production to satisfy the collector's demands. Either of these methods stifles economic development, hurting the kingdom in the long run; not to mention the political unrest generated among the populace.

If tax farming was so common throughout the centuries, what was the problem with Sar Shalom ben Moses? I'll explain tomorrow.