The Book of Pee 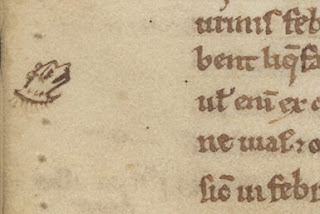 One of the medical texts composed by Isaac Israeli ben Solomon was translated from Arabic to Latin and called De Urinis ("Concerning Urine"). One manuscript copy (Ms. 690) in the University of Utrecht Library shows signs of frequent use, and yet has survived for 800 years with its original binding, showing extreme care being taken by any of its owners.

De Urinis was not one of the books translated at Toledo; the Latin version that was used in the Middle Ages was translated by Constantine the African, a Benedictine monk and physician who spent the first part of his life in Ifriqiya, then brought Isaac's work and others from Tunisia to his retirement at the Benedictine Abbey of Monte Casino. Unfortunately, Constantine often did not include in his translation the name of the original author, leading many to think that he himself wrote the medical texts. It took other references to these works to be able to affix the proper author's name. (The illustration here shows a dog's head added to the margin by a bored copyist.)

There are ten sections to De Urinis, as follows:

According to the Utrecht summary of the manuscript:

This text influenced islamic medicine to a great extent (where uroscopy was of great importance) and contributed to the rise of uroscopy as one of the most important branches of medicine in the Middle Ages (Prioreschi 2001). Ms. 690 is a remarkably early witness of this.

If you would like to see the manuscript in digital form, click here.
This is the second post in a row that mentions Ifriqiya, which sounds like "Africa" and should be addressed. I shall do so next.
*Referring to the four humors whose proportions determined a human being's temperament and health: yellow bile, black bile, phlegm, and blood.
Posted by Daily Medieval at 7:00 AM