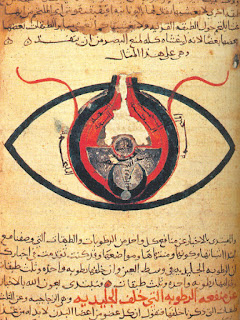 Some of the works translated at Toledo by our old friend Gerard of Cremona were the Book of Definitions and the Book of Elements into Latin from Arabic. Written by Isaac Israeli ben Solomon (alias Isaac Israeli the Elder, alias Isaac Judaeus), sometimes known as Isaac the Jew, they and his other works became standard works in medicine at Salerno.

Isaac Israeli ben Solomon was born in Egypt around 832CE. Growing up in Cairo, he became known as a skilled oculist (illustration is from an Arabic manuscript on oculism, showing the parts of the eye). About 904CE he was made court physician to Emir Ziyadat Allah III of Ifriqya (and I really should talk about him and there in the near future). A few years later he traveled to Kairouan, Tunisia and studied under a famous Arab physician, then became the doctor to 'Ubaid Allah al-Mahdi, who founded the Fatimid dynasty. al-Mahdi found Israel charming and witty.

In Kairouan he started writing his treatises, which were considered "more valuable than gems," and giving popular lectures on medicine and other topics in science. All his treatises were written in Arabic. Besides the ones mentioned above, they also include The Book on Fevers, a work on food and remedies called Universal Diet, and more. He also wrote books on philosophy, metaphysics, logic, a commentary on Genesis, and a treatise on the difference between the spirit and the soul. The Latin translations of many of these were quoted by Albertus Magnus, Aquinas, Roger Bacon, Nicholas of Cusa, and others.

Next I want to delve into one of his works specifically. I don't think I've ever indulged in what they call "dad jokes," but let me just say "urine for a treat."

Posted by Daily Medieval at 7:30 AM