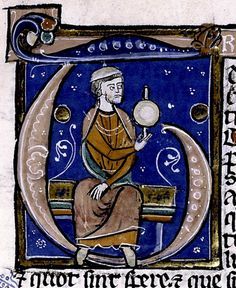 Gerard of Cremona (1114-1187CE) was an important translator of Arabic texts into Latin. Born in Cremona in northern Italy, he went to Toledo in the Kingdom of Castile because he desired to learn more about Ptolemy. Why did an Italian travel to Spain to learn about a Greek? Because Ptolemy's writings, although the man and his importance were known to Europe, were not available except in Arabic translations from the Greek.

Why Toledo? We'll delve into that more deeply tomorrow. For now, know that Gerard learned Arabic sufficiently that he not only translated Ptolemy's Almagest, the definitive work on astronomy until it was replace by Copernicus, but also he is credited with translating a total of 87 Arabic works.

Many of them were Arabic translations of Greek originals. Gerard's work made available to Latin readers works by Archimedes, Aristotle, Euclid's Elements of Geometry, and Arabic works on algebra and astronomy. He also edited the Tables of Toledo, a compilation of astronomical data.

There was a second Gerard of Cremona, however, and some of the 87 works attributed to Gerard might have been translated by Gerard, if you follow. This second Gerard was working in the 13th century, and seems to be the translator of medical works, whereas the first concentrated on astronomy and science. Roger Bacon's access to Al-Kindi's work, which would have been after 1240, is likely to be due to the second Gerard. Modern scholarship on the work of Gerard points out that many of the words he uses in his Latin translations are still used today; diaphragm, orbit and sagittal are examples. (To be fair, some of the modern scholarship also suggests that his translations look like the work of a hurried graduate student.)

But back to Toledo. In the 12th and 13th centuries, there was a robust Toledo School of Translators. I'll tell you about it tomorrow.