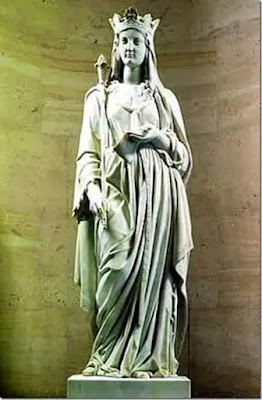 Blanche of Castile was born on 4 March, 1188, in Palencia in north-central Castile (Spain). Her father was King Alfonso VIII; her mother was Eleanor of England, a daughter of King Henry II. In her lifetime, an attempt to end the endless fighting between England and France over the Duchy of Normandy took place between John of England and Philip II of France. This was the Treaty of le Goulet, and it was sealed with a marriage between Blanche's sister, Urraca, and Philip's son Louis.

Eleanor of Aquitaine, however, decided that Blanche would be more suitable for the marriage. When Blanche was 12 years old, Eleanor took Blanche to France to make the marriage happen. Louis was only 13, and so the marriage would not be consummated until a few years later. Blanche bore her first child in 1205.

Because Blanche had English ancestry through her mother (more specifically, through her grandfather Henry II), her role in the alliance marriage was accepted, and Louis of France was agreed to as the future king of England. King John died in October 1216, however, whereupon his son, nine-year-old Henry, was supported by the barons, who then rejected the idea of Louis inheriting the throne.

Louis' father Philip Augustus refused to support him in another war with England. Blanche decided to raise money for a fleet to send against England to put Louis on the throne. She organized two fleets; neither succeeded, being soundly defeated by English forces.

She only enjoyed three years as Queen of France before Louis died in 1226, leaving Blanche regent for his  12-year-old son, Louis IX. Several French barons did not support the young king, but Blanche appealed to the townspeople of Paris to protect him, which they did. She was instrumental in creating the Treaty of Paris which recognized Louis as king.

She was a highly important figure during her life, never backing down from fighting for what was right (for her).

One event she created which was not for her direct benefit was deciding to treat Jews fairly. She arranged the Disputation of Paris, a debate between Christianity and Judaism, which I will look at tomorrow.