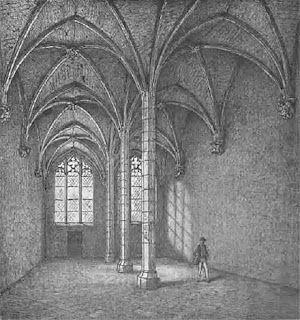 The city of Orleans is in north-central France, in the Loire Valley. In the very early Middle Ages it had been the capital of the Kingdom of Orleans, but under the Capetians (who ruled France from 987CE to 1328), it became merely part of a county. It regained a little prominence when King Louis IV held his coronation in Orleans Cathedral instead of in Reims. In the later Middle Ages, Orleans was one of France's three richest cities, along with Paris and Rouen.

The University of Orleans started in 1230, when several; teachers and students fled the turmoil taking place at the University of Paris. Pope Clement V (1264-1314) studied there, and as pope published a papal bull in 1306, endowing the scholarly pursuits there with the status of university. In all, twelve popes granted it privileges.

In the 1300s it had as many as 5000 students from France, Germany, and even Scotland. Eustache Deschamps was one. St. Ivo of Kemartin, the patron saint of lawyers, was another. Later notables were John Calvin, Pierre de Fermat (of Fermat's Last Theorem fame), and Molière.

Speaking of the University of Paris, what was the turmoil that caused teachers and students to flee to Orleans and start teaching there? We'll get into that next time.

Posted by Daily Medieval at 7:02 AM