The Disputation of Paris, Part Two 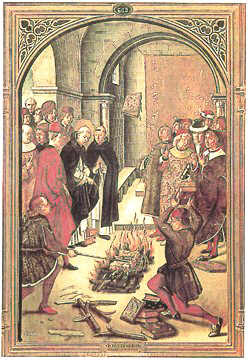 The Disputation of Paris, a debate between four rabbis and a Jew-turned-Franciscan, began on 12 June 1240. There were 35 charges against the Talmud that the Franciscan, Nicholas Donin, had brought before Pope Gregory IX. Among blasphemous statements about Jesus and Mary, there were passages that supposedly allowed Jews to kill non-Jews, to lie to Christians, and to violate promises without guilt. In France, all copies of the Talmud were confiscated and prepared for burning pending the outcome of the Disputation: if the charges against the Talmud were proven, then the copies were to be destroyed.

Rabbi Yechiel of Paris headed the defense. In many cases, the charges that Jesus was blasphemed against came from folklore about people named "Jesus" (Yeshu) which was not a unique name. One tale was about a Jesus who was boiled in excrement for all eternity in Hell. Another was of a Yeshu who was executed for sorcery. Yechiel pointed out that these were not the Jesus of the New Testament, and that not everyone named "Louis" was King Louis. Another Jewish folktale suggested that Adam, prior to being given Eve, tried copulating with the animals in Eden.

Although some witnesses believed that the rabbis were successful in their defense, there was little doubt that the Disputation was a formality encouraged by Blanche of Castile, the mother of King Louis IX of France. The Talmud was condemned.

On 17 June 1242, 24 wagon loads containing thousands of volumes of the Talmud and other Jewish works were burned. Since the printing press (as we know it) did not exist, these documents represented countless hours of work to create. The loss was incalculable, and replacement unimaginable.

This was not the last event of its kind. There was another one a generation later that was even turned into a movie with Christopher Lee. I'll talk about that next, and a little more on the history of Christianity's attitude toward Jewish written works.