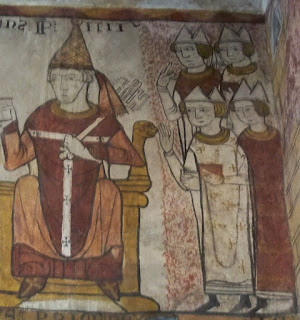 Gui Foucois was born November 1190 in the Languedoc region of France to a lawyer. He became a soldier at the age of 19 to fight the Moors in Spain. Afterward, he studied law in France, and became a secretary to King Louis IX. He married and had two daughters, both of whom became nuns. After his wife's death, he joined the church.

Possibly through the influence of the king—which is not to say he wasn't deserving of promotion—he rose rapidly in the ranks, becoming a pastor in 1255, Bishop of Le Puy in 1257, Archbishop of Narbonne in 1259, and a cardinal in December 1261. He was the papal legate to England 1262-64.

I've said enough about the Disputation of Barcelona in recent posts that there is no need to repeat myself. Among his other actions, he invited the Dominican Thomas Aquinas to Rome in his capacity as a theologian, who founded what in modern times is called the Pontifical University of Saint Thomas Aquinas, whose focus is the philosophy of Aquinas.

In 1267, Clement started corresponding with Abaqa Khan, whose father was a grandson of Genghis Khan. Abaqa was suggesting a Franco-Mongol alliance in order to deal with a common enemy. The Mongol Empire faced conflict with Muslims; Western Europe wanted Christian control of the Holy Land. The alliance made sense, and embassies went back and forth, but there was never any coordination of forces to deal with their mutual Muslim concerns.

Also, Clement died in November 1268. The Throne of St. Peter was empty for the next three years. The College of Cardinals had some argumentative and stubborn men, but rather than address that...

...Roger Bacon, an eminent English philosopher, addressed his Opus Majus to Clement; why, and what it is, will be next.