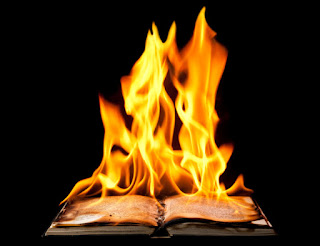 The rounding up and burning of the Talmud and other important Jewish works, and the Disputation of Paris, in France in the early 1240s were not the only events of their kind. Western civilization had a tradition of harassing Jews by denying them their sacred and important texts.

Emperor Justinian in 553 forbade Jews to use the Secunda Editio (Latin: "Second Edition"), apparently referring to the Midrashic commentaries on Scripture. Centuries later, Crusaders marching through Germany decided to defend Christianity long before reaching the Holy Land by confiscating Jewish works as they passed through cities, leaving behind them piles of ash.

A decade before the Disputation of Paris, a public burning of Maimonidean writings took place in Montpellier France. Like the Disputation, this was started by an "internal" dispute. Solomon ben Abraham of Montpellier was extremely orthodox and was opposed to Moses ben Maimon's philosophy, so he invited Dominican and Franciscan inquisitors to look at the writings of one whom Solomon considered a heretic. The burning took place in December 1233. The inquisitors did not stop there. About a month after the Montpellier event, the Talmud became a target; copies of it and others—an estimated 12,000 volumes—were burning publicly in Paris.

In July 1263, the Disputation of Barcelona took place at the court of King James I of Aragon between another convert from Judaism to Christianity, the Dominican Friar Pablo Christiani, and the leading Jewish scholar Moshe ben Nachman, called Nachmanides. The debate was chiefly on the question "Was Jesus the Messiah?" The Disputation is a play by Hyam Maccoby, based on the Disputation; it was made into a film in 1986 starring Christopher Lee. You can watch it on YouTube.

The Christians claimed victory, but King James gave Nachmanides 300 gold coins, and to explain that, I should next tell you about James of Aragon.