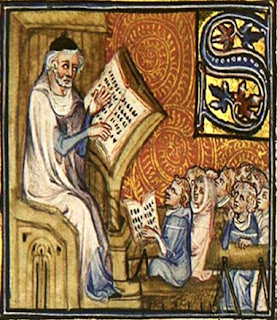 Somehow, in 770 posts on this blog, I never talked about Eustache Deschamps before. He was an extremely prolific poet who lived from 1346 until 1406/7. Born in northeast France, he studied under Guillaume de Machaut (about whom I have posted). Then, after studying law at Orleans University, he became a diplomatic messenger for King Charles V. He was granted other significant titles and duties during his life, including governor of the the commune Fisme.

Fisme suffered during the Hundred Years War between the English and French, and for this and other reasons Deschamps hated the English, using his poetry to express his feelings.

Deschamps wrote over 1100 ballades. To be fair, ballades were fairly short. The medieval ballade consisted of three eight-line stanzas with a repeating refrain. Most of them are satirical attacks on the English. He had praise for one Englishman though: he wrote one ballade praising Geoffrey Chaucer as a philosopher and poet. Chaucer, in turn, was inspired by Deschamp's one long poem, over 12,000 lines o the subject of women.

He also wrote a treatise on French poetry, in which he outlined the "rules" for different kinds of verse. He also shares his theory about music versus poetry. Music he considers "artificial" because anyone can learn it (it was a major course of study in universities), whereas poetry was "natural" because without being born with the talent for poetry, you would not be any good at it.

At least one line of his you might have heard. He wrote "Friends are relatives you make for yourself."

Next, I want to tell you a little about his university.