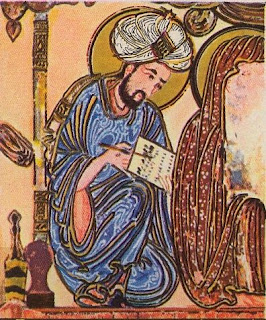 Abu Yūsuf Yaʻqūb ibn ʼIsḥāq aṣ-Ṣabbāḥ al-Kindī (801-873CE) is called the Father of Arab philosophy. Born in Kufa and educated in Baghdad, he was instrumental in the translation of many Greek scholarly texts into Arabic. (Remember that a lot of classical scholarly knowledge came to Western Europe via Arabic translations.) He is also credited with introducing Indian numerals (what we mistakenly think of as Arabic numerals) into the Arab and western world.

He was a polymath who contributed to many fields, although he did not always find the scientific truth.

In astronomy he followed Ptolemy's geocentric theory of the solar system, and he was certain the planets followed circular orbits in obedience to God.

He was a chemist who debunked the idea of alchemy turning base metals into gold or silver. He was the first to distill pure ethanol, with which he created several perfumes. He also created cosmetics and pharmaceuticals, and wrote a book on the chemistry of perfume.

A recently discovered book of his in Istanbul, entitled (in English) A Manuscript on Deciphering Cryptographic Messages shows that he was a pioneer in cryptography with the first known explanation of how to decipher encrypted messages by analyzing the frequency of letters.

He wrote on pollution, environmentalism, and meteorology, and explained tides as a result of heating and cooling.

He published 15 treatise on music theory—five of which have survived—including the first known written use of the term "music" (musiqia); he urged the use of music in therapy.

In optics, he explained that both the eye and the object seen must be linked by a transparent medium (air) filled with light. He criticizes Anthemius of Trailes for reporting that sunlight could be focused in war to cause opposing warships to burst into flame. Anthemius did not witness it himself. Al-Kindi performed experiments to be certain this would actually work.

His theory that time, space, motion, and bodies were not absolutes but relative to other objects and the observer puts him closer to Einstein than to Galileo and Newton.

Although his belief that philosophy could support theology was contested by many Arabic scholars who followed him, his writings laid the groundwork much of Arabic philosophy to come.

He also applied mathematics to pharmacology, which I'll talk about tomorrow.