A Book of Fables 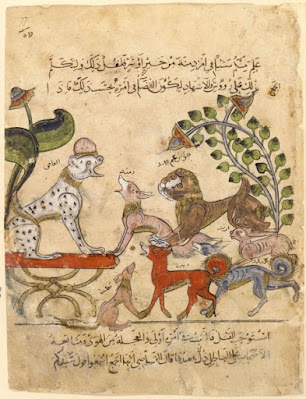 King Alfonso X's son, Fernando de la Cerda, requested that the Toledo School of Translators produce a Castilian version of a Book of Fables, Kalīla wa-Dimna. The book is a series of stories with animals as the main characters; each story has a lesson to be learned, similar to the fables of Aesop.

The title refers to two of its characters who are jackals, the steady Kalīla and the ambitious Dimna. They are door wardens for the king, who is a lion. Oddly enough, Kalīla and Dimna only appear in the first of the 15 stories contained in the collection.

Several of the stories include a king, and their subject matter is usually about the relationship and duty of a king toward his subjects. The introduction to the book claims that it was written for the king of India. It was then called the Panchatantra. When the king of Persia, Khosrow I, heard of the book, he sent his physician to India to make a copy in Pahlavi (Middle Persian).

Copying was not allowed by the king of India, but the physician, Borzuya, was allowed to read it. He read a story each day, and then at night wrote in a journal what he remembered. In this way he brought the fables westward. The Arabic author and translator Ibn al-Muqaffa (died c.756) translated it into Arabic as Kalīla wa-Dimna. It became the first Arabic literary classic. Its popularity led to the publication of a German version by Gutenberg. Today copies can be found in over 100 languages.

The frequent theme of a king's relationship with his subjects places this collection not only into the genre of fables but also into the genre of "Mirrors for Princes," guides to teach proper conduct when one has authority and responsibility.

One more foray into the realm of cultural and linguistic melting pots: next time, we look at Mozarabic culture.