University of Paris - The Strike 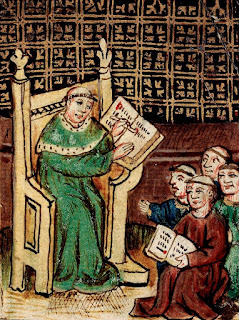 I mentioned yesterday that Orleans University had its start in 1230 with teachers and students who fled from turmoil at the University of Paris. Time to explain the turmoil.

In March 1229, University of Paris students—normally boisterous and given to drinking heavily—were enjoying the pre-Lenten Mardi Gras-like atmosphere (it was Shrove Tuesday and the beginning of Lent). An argument broke out between a band of students and a tavern proprietor over the bill; a fight ensued, resulting in the students being beaten by the townspeople and tossed out.

The students returned the next day, Ash Wednesday, with friends and clubs. They trashed the tavern and beat the taverner. A riot started that damaged nearby shops. The students thought themselves free from punishment, because university students had benefit of clergy. The King's courts couldn't touch them, and the ecclesiastical courts tended to be protective of university students, who were all potential clergy.

The King of France at the time, Louis IX, was only 15 years old. The regent in charge of royal affairs decided the students' crime could not be allowed to go unpunished. The Paris city guard, not known to be gentle toward university students anyway, were given permission to mete out punishment. They found a group of students and killed several. There is no proof that the guardsmen had attacked the actual instigators of the original trouble.

The university went on strike. Teaching ceased. Students left, taking their spending money with them. The economy of Paris suffered. Students and teachers wound up in Reims, Oxford, Toulouse, and some went to Orleans and started teaching there.

In 1231, Pope Gregory IX (an alumnus!) issued a decree that the University of Paris was under papal patronage, making it independent of any local authority. Masters were allowed to cancel classes for almost any provocation; the threat of economic losses kept the city in line.

If the regent had not stepped in, who knows what would have happened? More rioting? Or just moving beyond the incident. No dispersal of university staff and students might have meant no university at Orleans or elsewhere? We will never know. But we do know who the regent was who caused that turning point: Blanche of Castile. I'll tell you about her tomorrow.