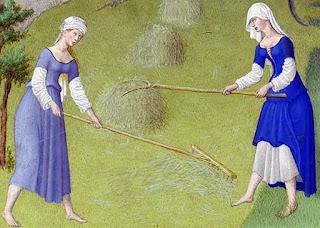 A medieval peasant—for this term, we mean an agricultural laborer—could be free or unfree. Although serf would seem to be a useful term (deriving from Latin servus, "slave"), it doesn't appear in written records until the late 15th century. For the difference between free and unfree, I will use the terms freeman and villein.

A freeman was just that: a tenant who was free from owing service to the lord of the manor. He paid rent for the house and land. The percentage of freemen was small, maybe 10% in England.

The greater number of peasants on a manor were villeins, who also rented land and homes, but were obligated to spend time working the lord's fields as well. They were allowed to farm their own land as much or as little as they liked: they would at least try to be self-sufficient, but if they sold goods and made a profit, so much the better. The lord's permission was needed to leave the land and to marry.

Could a freeman become a villein? Imagine a drought or some other natural disaster that caused crop failure, or some destruction by criminals. The freeman could fall on hard times and be unable to pay rent, at which point he could make an arrangement to the lord of the manor, essentially indenturing himself for a period of time. During that time, defaulting on that deal by moving to another manor would be a bad idea.

Could a villein become a freeman? Well, he could run away; if he made his way to a city and survived for a year without being sought and caught, he was automatically free. That was a risky way. He could purchase his way out of bondage, by earning enough from his industry to pay off the lord. Here's the thing, though: when villeins made sufficient money to purchase their freedom, they didn't. The likeliest reason is that their unfree status entitled them to protections that. freeman did not have (see the above paragraph). Being unfree may seem like a burden, but it afforded security in ways that being a freeman did not.

This is not to say that peasants were content to "stay in their lane." In 1381, there was a significant revolt, which we'll talk about tomorrow.