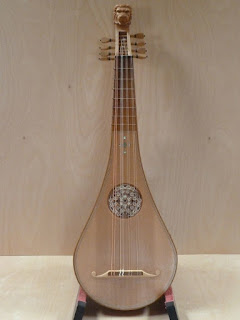 The 14th century French poet Eustache Deschamps said “at royal courts everyone wants to play the trumpet, gittern, and rebebe.” You know what a trumpet is. The rebebe was a bowed instrument. The gittern has been called:

"one of the most important plucked fingerboard instruments of the late medieval period. Loved by all levels of society, it was played by royal appointment, in religious service, in taverns, for singing, for dancing, and in duets with the lute." [link]

The gittern could have anywhere from two to five gut strings, played with a plectrum made from a quill. It was shaped like a smaller lute with a pear-shaped body. The body and the neck were a single piece of wood, unlike many other stringed instruments.

The popularity of the gittern may have led to its scarcity now. When something is extremely common, it is not always valued properly. In consequence, despite its popularity, we have very few extant gitterns today. You can see one in the Metropolitan Museum of Art, there's one in the Wartburg Castle Museum in Eisenach, Germany. These were the only two known, until one was recognized in a medieval outhouse in Poland.

The image above is of a modern recreation from a maker of musical instruments. If you would like to hear a gittern being played, click here.

But who was Eustache Deschamps, who made such a bold statement about the gittern? I'll gladly talk about him tomorrow.