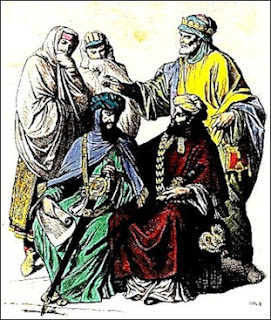 A few days back, Ladino was mentioned in the first post about the Toledo School of Translators. I described it parenthetically as Judaeo-Spanish and left it at that. After 1492, when Jews were expelled from Castile and Aragon, it spread throughout the known world. It is still spoken today by Sephardic minorities, recognized as a minority language in Bosnia and Herzegovina, and in 2017 was formally recognized by the Royal Spanish Academy. Ladino is just one part of a larger topic to me, the blending of two cultures, which prompts me to address Mozarabic culture.

"Mozarab" is likely from the Arabic musta 'rib, which is most easily translated as "to make oneself similar to Arab." Medieval writers used the term "Mozarabic" to refer to Christians living in the Iberian Peninsula which had been steeped in Arabic and Islamic culture. The earliest example we have is from 1026CE, in a land dispute between monks of San Ciprian de Valdesalce and three muzaraves de rex tiraceros (royal silk workers). By 1085 Mozarab was more common, being used to mean Christians who lived under Muslim rule, adopting their customs and language.

The point is that Arabs, Jews, Christians, and Mozarabs were able to coexist on the Iberian Peninsula for centuries. The multilingualism among many individuals that resulted from this coexistence made the location ideal for scholars from all over to come to learn from sources in other languages. The Archbishop establishing the Toledo School of Translators was an original idea, but not a surprising one, considering the resources at hand.

It would be unfair, however, to neglect telling you that some Christian scholars traveled to Iberia to learn to read the Koran well enough to be able to write polemics against it. In turn, as Roman law became increasingly irrelevant in Iberia, the non-Muslims had to deal with Sharia law. But that's a topic for next time.