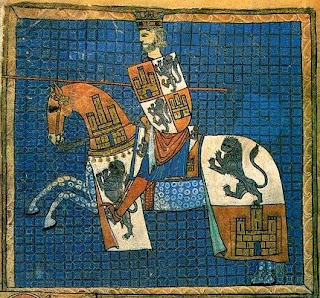 The previous post refers to John of Seville being the chief translator from Arabic into Castilian; this is an important linguistic distinction.

The Iberian Peninsula at the time contained several different kingdoms. The Toledo School of Translators was in the southern part of Castile. Navarre and Aragon were eastward, and the Catalan Counties further east. Galicia and Leon were westward, and also Portugal (much smaller than it is today). Southward was all Muslim-held. All these territories had their own dialects; not only was there no "Spain," there was no "Spanish." Into this situation stepped King Alfonso X of Castile.

Alfonso (1221-1284CE) was King of Castile, León, and Galicia. His court was a melting pot of Jews, Muslims, and Christians, and he encouraged the translation of scholarly works from Arabic, Hebrew, and Latin into the Castilian vernacular. He wanted more works put into a language that was llanos de entender ("easy to understand") and would therefore reach a wider audience, not just the highly educated. They used a revised version of Castilian that would become the foundation of Spanish.

The method of translation changed as well as the target language. In the first phase of the school, a native speaker would read aloud the work to a translator who would dictate Latin to a scribe. Under Alfonso, a multi-lingual translator would translate from the original language to Castilian, which he would dictate to a scribe. The resulting text would be checked by editors for accuracy. Sometimes, Alfonso himself would proofread the text.

Alfonso of course dealt with other affairs besides scholarship. He had a civil war, for instance, but it's nice to focus on something other than politics in a king's reign. For instance, he organized about 3000 sheep holders into the Mesta to ensure a coordinated supply of wool. Someday I may return to Alfonso, the Mesta, and why it and his other policies were economically disastrous for him. For tomorrow I want to look at the very first translation in Castilian to come out of Alfonso's revised school, a book of fables.