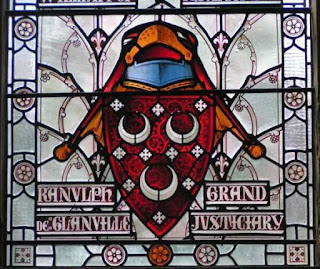 Ranulph de Glanvill is the reason I started dailymedieval.com, to pay some attention to the countless people, places, and paraphernalia of the Middle Ages that would never get any attention in the Modern Era, but were of course significant in their time.

We don't know much now about his early life, except that he was born about 1112 at Stratford St. Andrew in Suffolk. His public activity is first noted as Sheriff of Yorkshire, Warwickshire and Leicestershire until he was removed from office in 1170 along with several other sheriffs for corruption.

Whatever his offense, it did not prevent his re-appointment as Sheriff of Lancashire by 1173, then Sheriff of Westmoreland in 1174. During the Battle of Alnwick in 1174, when William I of Scotland invaded Northumbria, Ranulph was the leader of an English force that met and captured William. King Henry II appreciated this, and later appointed Ranulph Chief Justiciar of England. This sounds like he was made "Chief Justice," but that is not the case. The Chief Justiciar had authority comparable to the modern Prime Minister, as the monarch's chief minister.

As Henry's right-hand man, he was effectively the regent when Henry was absent from the kingdom. He was also entrusted to custody of Eleanor of Aquitaine, when Henry saw fit to confine his queen to Winchester Castle. (There were good reasons for this, which we will someday get to.)

After Henry's death, Richard I imprisoned him until he paid a ransom. Why? A possible reason is that Richard just wanted to raise money to continue his favorite pastimes: fighting and Crusading. Ranulph went on Crusade and died in 1190 at the Siege of Acre. Considering his age, I would not be surprised if Richard coerced Ranulph into "taking the cross."

During his lifetime, he founded two abbeys and a leper hospital. Of course, he also produced the Treatise of Glanvill, discussed in the previous post. Next time, we'll look at some of the medieval legal terms addressed and codified on the Treatise.

Posted by Daily Medieval at 7:15 AM