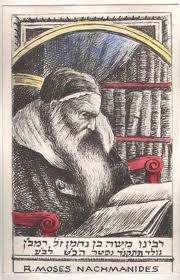 First, let's talk about the name. He was born Moses ben Nachman. He sometimes called himself Ramban, an acronym for Rabbi Moses ben Nachman. Nachmanides is the Greek form of his name, and how he is recognized in western literature. He lived from 1194 - 1270, and lived most of his life  in Catalonia.

He was a scholar, a physician, a philosopher and poet. He began writing commentary on Jewish law at the age of 16. He believed that the rabbis of the Talmud and Mishnah were not to be criticized. He criticized his scholarly predecessor, Maimonides, however. Where Maimonides described any story in the Old Testament where angels appear as a prophetic vision rather than a true angelic visitation on Earth, and tried to explain some of the events in the Bible as naturally occurring, Nachmanides asserted that

no man can share in the Torah of our teacher Moses unless he believes that all our affairs, whether they concern masses or individuals, are miraculously controlled, and that nothing can be attributed to nature or the order of the world.

Previous posts discuss his participation in the Disputation of Barcelona and its outcome. He wrote an account of the debate afterward. Pablo Christiani, his chief opponent in the debate, seized on this account as further proof of blasphemy: he found objectionable passages and went to the head of the Dominicans, Raymond de Penyafort. A charge was brought against Nachmanides, and the complaint was brought before King James. Nachmanides pointed out that his account contained nothing that he had not already said in the presence of the king during the disputation, where the king himself had allowed him to speak freely. His innocence was clear, but the Dominicans wanted results, so Nachmanides was exiled for two years.

An appeal to Pope Clement IV made the exile permanent. Nachmanides, at the age of 70, had to leave his lifelong home. He eventually made his way to Jerusalem, where he reestablished the Jewish community that had been disrupted by the efforts of the First Crusade. He also established a synagogue that is to this day known as the Ramban Synagogue. He died at the age of 76; his burial place is unknown.

This blog has previously discussed Popes Clement I, II, III, V, VI, but never IV, the man who made Ramban's exile permanent. I think I have my topic for tomorrow.