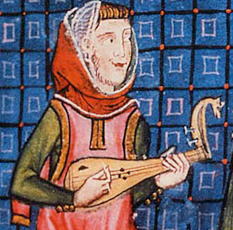 The Peasants Revolt of 1381 was an uprising against...let's say "government overreach." It was not a simple protest, however. The rebel crowds over the course of months murdered officials and damaged buildings, even burning some down, including the most magnificent house in London, the Savoy Palace, residence of the king's uncle, John of Gaunt.

Of course, there would be repercussions. Hundreds and hundreds were involved, but they could not all be identified and incarcerated. Principle actors, however, paid a heavy price. The chief name linked to the Revolt was that of Wat Tyler, who was struck down early on by the Mayor of London, Simon of Sudbury.

One of the few names on a list of those whose involvement was so egregious that they were to be beheaded was John Stakpull, or Stakepoll. Other than this, we really have no clues to the identity of this man; rather, we have some circumstantial clues.

An escheator record (an escheator is in charge of confiscating property on behalf of the Crown) lists the possessions of Stakpull that had been taken after his beheading. Here's the list, and the value of the items in shillings and pence:

The overslop is interesting, because it suggests that he had been a soldier. But then, lots of people had been soldiers. No, the curious items are the harp and gittern. These musical instruments, along with the very colorful garments, suggest that he was a minstrel. Could he have been the first protest singer, playing music to rally the rebels? We'll never know.

But let's go in a different direction. You might be assuming that the "gittern" is an old word for a guitar. Not quite. Let us talk about the gittern when next we meet.