The Peasants Are Revolting! 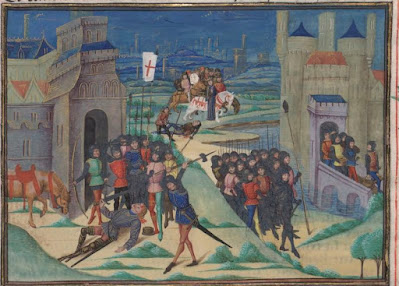 The Peasant's Revolt of 1381 was the result of several factors , first enumerated and named in A Short History of the English People (John Richard Green, 1874), and analyzed endlessly since. (You can find several posts I've made on this here.) Distrust of government, belief in corruption of royal officials, anxiety over the French raiding southern England, and a poll tax of 12 pence per adult—the third in four years—made the average rural citizen say "Enough!"

The first signs of rebellion came when collectors of the poll tax were attacked in spring. This was followed by more resistance by attacking justices in Essex in May, and then a June uprising in Essex promised to rebel against all the king's laws. People started burning property, and an escheator (official in charge of claiming property for the Crown when, for instance, the previous owner died intestate) was beheaded and his records burned. Elsewhere, houses of officials and official records were being destroyed.

A leader appeared in the records, one Wat Tyler, who led the rioters into Canterbury, executing officials and freeing prisoners, after which they approached London. The group was joined by a radical priest, John Ball, southeast of London. Meanwhile London was experiencing a sympathetic uprising of citizens who burned the grandest house in London, the Savoy Palace, and the main building of the Hospitallers.

The rebels outside London entered, invading the Tower of London. They captured and beheaded the Archbishop of Canterbury, Simon Sudbury, and others.

See my other posts for more detail, but let me say that most of the rebels were given pardons once the destruction stopped, except for the individuals who were responsible for more grievous destruction and murder. A list of "principle leaders and traitors" includes Walter Tyler (who had been killed earlier by the Mayor of London), Alan Threader, William Hawk, and John Stakpull. We know very little about John, but what we know leads to an interesting conjecture. I'll tell you about that next time.