James I of Aragon 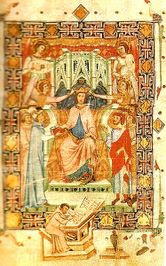 James I of Aragon (2 February 1208 - 27 July 1276) reigned longer than any Iberian monarch. The Iberian Peninsula contained several different political entities; besides being King of Aragon, Count of Barcelona, and Lord of Montpellier, James was eventually also King of Majorca, and even later King of Valencia.

He agreed with Louis of France to not try to reclaim the Cataln lands to the north that France had taken from James' father, Peter II of Aragon; in return, he prevented France from trying to push south into the County of Barcelona.

A great patron of the arts and learning, he wrote (actually, dictated) the first autobiography of a Christian king, Llibre dels fets (Catalan: "Book of Deeds").

In 1263, he presided over the Disputation of Barcelona, a debate on the identity of the Christian Messiah between a converted Jew, Pablo Christiani, and a Jewish rabbi, Nachmanides. On the question "Is the Messiah a divine or human being?" Nachmanides said:

"[... it seems most strange that... ] the Creator of Heaven and Earth resorted to the womb of a certain Jewish lady, grew there for nine months and was born as an infant, and afterwards grew up and was betrayed into the hands of his enemies who sentenced him to death and executed him, and that afterwards... he came to life and returned to his original place. The mind of a Jew, or any other person, simply cannot tolerate these assertions. If you have listened all your life to the priests who have filled your brain and the marrow of your bones with this doctrine, and it has settled into you because of that accustomed habit. [I would argue that if you were hearing these ideas for the first time, now, as a grown adult], you would never have accepted them." [The Disputation at Barcelona. p. 19. ISBN 0-88328-025-6]

Even though Christiani and the Dominicans claimed the victory, James was so impressed with Nachmanides' answers that he gave him 300 gold coins, telling him he had never heard "an unjust cause so nobly defended." James even attended the synagogue in Barcelona on the Sabbath after the Disputation, addressing the congregants, an event likely unique in Medieval Europe.

Rather than have the Talmud destroyed, James ordered the removal of passages that seemed offensive to Christians, creating a commission of the bishop of Barcelona and some Dominicans to oversee the censorship. One of the Dominicans, Ramón Martí (Raymond Martini), did not want the Talmud destroyed, because he claimed many passages in it confirmed the truth of Christianity. But don't think Martini was sympathetic to Judaism: he wrote two anti-Jewish books.

After the Disputation, Nachmanides wrote an account (see the passage above), but this account got him in further trouble. I'll finish talk of disputes and the Talmud with a brief bio of Nachmanides tomorrow.