The Toledo School of Translators 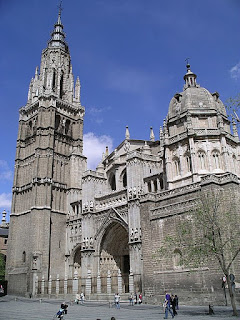 In the beginning of the 12th century, European science lagged behind Arabic scholarship, in many ways because early Greek texts had not made the transition to Western Europe, but were accessible by Arabic scholars in the Eastern Mediterranean, particularly their association with the Byzantine Empire. In the mid 12th century, the Archbishop of Toledo, a French Benedictine named Francis Raymond de Sauvetât (fl.1125-52), established the Toledo School of Translators at the Cathedral of Toledo to correct this lack.

The goal was not just to make Arabic learning available to the Latin-speaking west. Arabic texts were translated also into Hebrew and Ladino (Judaeo-Spanish). Examples are works by Maimonides, Ibn Khaldun (considered the originator of studies that would evolve into sociology and economics), and the physician Constantine the African.

The school was well-organized, and as a result we are aware of many of the translators who worked there. Gerard of Cremona was not the only noteworthy translator. John of Seville (fl.1133-53) was one of the chief translators into Castilian, working closely with Dominicus Gundissalinus, the first appointed director of the school.

The importance of Toledo for Western European scholarship cannot be underestimated. The University of Paris was the seat of the Condemnations of Paris: between 1210 and 1277, they were enacted to restrict teaching that were considered heretical. Without Toledo, who knows how long it might have taken for Europe to gain access to so much knowledge?

The school had two chief periods of activity. Tomorrow I'll talk about the second, and the importance of Castilian.